A few years ago I posted this fabulous sculpture here on my blog. I am very pleased to tell you that both the Artist Anne Neil and the Historian Barbara Dundas have given me more information regarding this amazing work. With their permission I share it with you now. I thank Barbara Dundas for initiating contact with me so I can share with you the true and historical meaning behind the work.

And just to quote from Barbara: "The markers acknowledge the physical and social changes and less obvious, but equally important, the need for the written word to help support and preserve those oral traditions of the First Nation people." 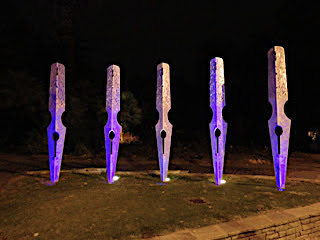 This art work Nibs - Memory Markers was completed by Artist Anne Neil and her team Blackwell Landscape Architects and Historian Barbara Dundas in 2005. The artwork is comprised of 5 dipping pen nibs that stand 3.5m high with blue up-lights

To understand the art work one has to consider the competition brief from the Perth City Council. The art work was to link the various historic and architectural sites in Perth- the Town Hall, Lands and Surveys Buildings (held all the original certificates of title to land in WA), the first Court House in WA, the Supreme Court buildings, the Bell Tower, convention centre and the historic Stirling Gardens and the broad cultural heritage of the area - land of the First Nation Aboriginal people, the Nyungah, Swan River people. In the preliminary historical search, the site became of particular importance, the start of colonial law, the first botanic gardens in WA, now Stirling Gardens and the adjacent Government House and the Government Gardens. The selected site was part of a place of meeting and landmark place with vistas to all the above sites. However, at this level  it appears to focus on European culture. The use of the nibs ... the written word was also a point of difference between the Indigenous and the European Cultures. The markers are located not far from the site of where  British Flag was first raised to mark the commencement of the  British  Swan River Colony  in Western Australia - a tree was felled at the site of the Perth Town Hall. Adjacent to the Memory Markers is the now Stirling Gardens and the entry to the Supreme Court.

The artwork was originally considered to have the name Script ... that is a legal term and the point of difference between the two meeting cultures. The selected name is Memory Markers, this both acknowledges the two cultures; their meeting  and the points of difference between the written record - the new legal system and an ancient oral tradition of the First Nation people. Adjacent, is a poem  from a newspaper in the 1930s, describing the place and its flowers. You will note the nib sculptures also have a variety of native and exotic (imported) plants  excised from them. At night the flowers are highlighted with blue up lighting and appear as art work on the nibs. In its landmark, position the nibs are visible both day and night from the north, south and west.

The markers are indeed poignant reminders of the complex history of this area and colonial settlement impacts. They recall the  power of the written word, the new legal system and the role of  planning and land ownership. They also pay tribute to those early settlers who marked out the town/ now City of Perth and the landscape and the changes in landscape. The markers acknowledge the physical and social changes and less obvious, but equally important, the need for the written word to help support and preserve those oral traditions of the First Nation people.
Barbara Dundas - HistorianThe  Artist and team member names are included in the sculptural context - on a a plaque nearby 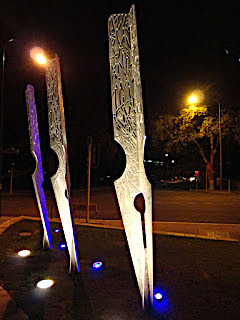 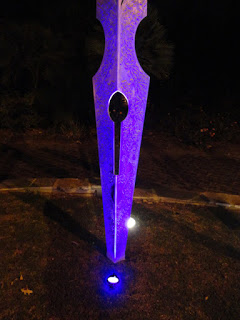 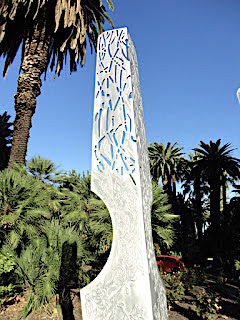 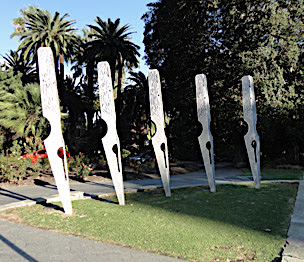